This past Tuesday evening, Hatch Lab was host to a very special reunion of amazing Portland women: this year's winners (& special guests) of the Portland Business Journal's Women of Influence Orchid Awards. Photoset by Kathy Peterman inside! 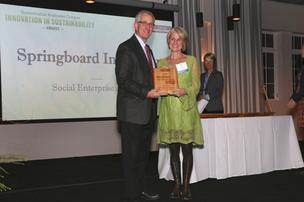 Amy Pearl, founder of Hatch (ne Springboard) Innovation, is leading efforts to establish Community Public Offerings in Oregon. The program, tentatively slated to become law on Jan. 1, would allow Oregon businesses to raise up to $250,000 from Oregon residents, who could invest up to $2,500. Portland Mayor Charlie Hales recently honored Pearl with an Innovation in Sustainability award, presented by the Portland Business Journal and Sustainable Business Oregon.

Oregon’s small businesses are one step closer to having a new capital raising tool at their disposal.

Community Public Offerings, or an Oregon form of crowdfunding, is on track to take effect Jan. 1 following a hearing Wednesday in Salem. The Oregon Department of Consumer and Business Services will continue to accept written comments on the new rules through next Wednesday.

Generally, the new rules will allow Oregon businesses to raise up to $250,000 from Oregon residents, with a cap of $2,500 on individual investors. The limit was raised from the original $2,000.

The program is authorized under the federal JOBS Act and is already in effect in various forms in more than 10 states, including Washington, Texas, Tennessee and others.

Amy Pearl, founder of Hatch Innovation for social entrepreneurship, played a leading role in developing the rules, securing approval at the state level and cultivating the first crop of businesses to take advantage.

Pearl estimates the move could unleash nearly $1 billion in new capital for small Oregon businesses, a figure based on 1 percent of the combined retirement savings of all Oregonians.

About a dozen businesses in Portland, Eugene, Southern and Eastern Oregon are preparing to file for public offerings, though they’re prevented from publicly discussing them at this point.

Bob Banks, a Portland attorney who has specialized in securities litigation for 40 years, said the $2,500 upper limit means investors won’t be crippled by the inevitable failure of some startups.

“There aren’t going to be too many people that if they lose their entire $2,500 will miss a meal or not be able to pay their electric bill,” he said.

Nevertheless, he cautioned that whenever funds are exchanged, there is the potential for abuse.

“There will probably — unfortunately — be circumstances with bad actors,” he said.

“It’s imperative to communities of color that may not have access to traditional lending,” he said.

Written comments may be submitted until 5 p.m. Dec. 10 to Shelley.A.Greiner@state.or.us.

The rules would affect Oregon small businesses looking to raise start-up cash, among other enterprises.

The Oregon Department of Consumer and Business Services wants to learn a little bit more about crowdfunding.
The agency is holding a public hearing today at 9 a.m. to collect input on a new proposed rule. The rule would create an exemption that allows Oregon-based small businesses to raise up to $250,000 from Oregon investors without needing to register the contributions.
The rule would place a $2,500 limit on any single investment.
Companies covered under the rule would need to be registered to do business in Oregon and sell securities only to Oregon residents.
The hearing takes place in Room 260 in the Labor and Industries Building, 350 Winter St. NE, in Salem.